Network Music Festival have teamed up with local sound art collective SOUNDkitchen to present an evening of live-performances from Birmingham’s best electronic artists. Warm-up to the festival with SOUNDkitchen’s usual eclectic mix of everything that’s experimental and electronic! 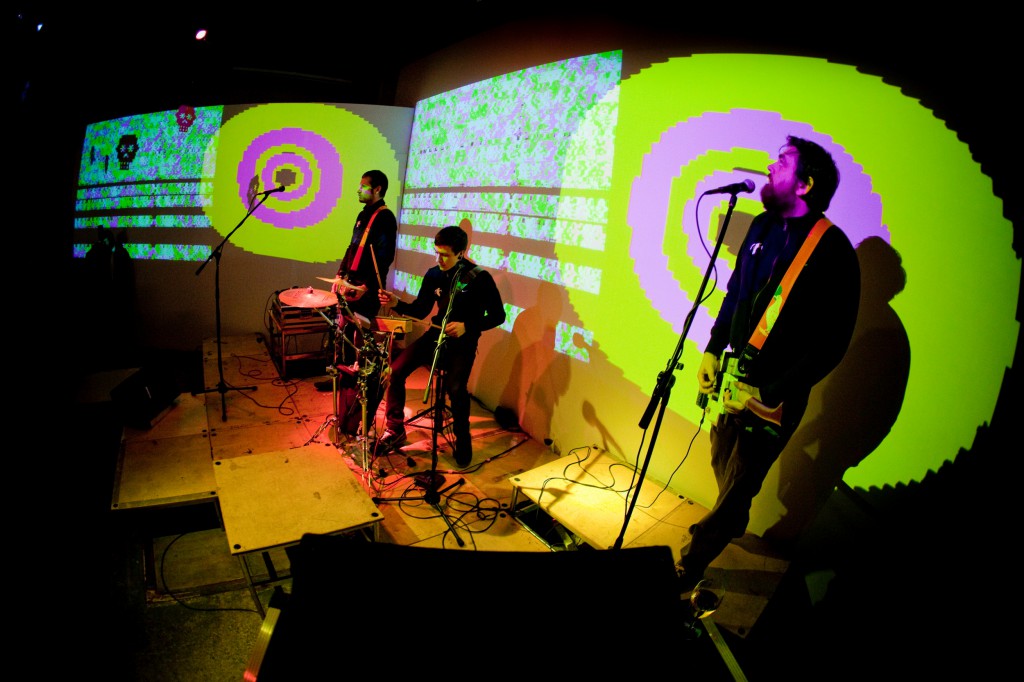 Juneau Brothers build hand-made and customised electronic instruments, which, in conjunction with the bespoke software they utilise, form the backbone of their performances. In recent performances they have utilised multiple screen video projections comprised of sound-reactive animations that form both a backdrop and visual illustration of the music. They write and play songs, which of late have looked at topics such as the demise of public sculpture in Birmingham, being bored in the countryside, pottery and the invention of RADAR. 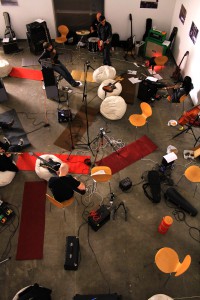 Andrew’s work comes in many shapes and forms and is often loud, quiet and confusing all at the same time! Coming from what some would see as a more traditional background of playing in bands (such as Einstellung, Sally and Katastrophy Wife, and not so traditional – Lash Frenzy), Andrew has had the pleasure of collaborating with various artists, musicians and promoters. This experience combined with a recent Fine Art Masters has allowed his work to develop naturally and honestly and now engages in a wide variety of mediums.

More recently Andrew’s work has concentrated on the theories of the sublime and attempts to remove any linear narrative and understanding. Central to Andrew’s work and performance is ‘experience’. This may be an experience for the performer or the audience or both.

Recent performances have included a 30 minute one note piece performed at the Birmingham Museum and Art Gallery, a 24 hour show at East Side Projects and a Capsule commissioned piece performed by a string octet at IKON as part of IKON’s Autumn Almanac.

Local artists Laternist, Hellocatfood, Chromatouch and Minuek have been tweaking creative software for many turns. The masterful glitchery of Antonio Robert’s (Hellocatfood), or the zen-like beauty of A.R. Brooker’s (Laternist)3D mesh experiments for example, both using PureData to express what’s going on in their heads… Or the VJ sensibilities of Leon Trimble (Chromatouch) and Jim Warrier (Minuek), who both come from an electronic music-making background and have an overriding sense of fusion of the audio and visual…

The dramatic audio performances of early radio coined the phrase ‘The Theatre of the Mind’ as it was proposed that they engaged the listener’s imagination more actively than visual theatre.

This sound installation references the advent of commercial radio broadcasting and the proliferation of radio listening, which overtook the gramophone in homes throughout America and Europe in the 1920s. In addition to the vintage technology in this installation, the sound material also acknowledges the period through the use of noise associated with the mediums of radio and gramophone and samples of vintage radio broadcasts and commercials.

The 1920s also saw significant developments in the field of electronic music, with the invention of electronic instruments such as the Theremin and Ondes Martenot. The latter favoured by the composer Olivier Messiaen. The Italian Futurist, Luigi Russolo, in 1921, gave a performance of his noise-generating devices called Intonarumori, a physical realisation of theory contained in his 1913 manifesto L’Arte dei Rumori (The Art Of Noises). References to these instruments and composers can also be heard in this work.