Small-world network is a telematic, cross-disciplinary performance of the Concordia Laptop Orchestra (CLOrk) in Montreal, CA and an acoustical ensembles Můstek and The Transcenders in Edinburgh, UK and California, USA, involving ca. 30 performers.

The piece – by CLOrk director Eldad Tsabary – utilizes multi-layered networks – a wide telematic network between the ensembles (and the venue) and a local network setup in each of the locations.

In mathematics, the term “small-world network” is used to describe a graph in which most nodes are not immediate neighbors, but can be reached from one another with small steps. Metaphorically, the “small-world” concept is meant to describe a musical homogeneity as an end-result in face of the multiple emerging contrasts (or dualities): acoustic and electroacoustic instruments, local and wide network connections, synchronized and latent musical elements, as well as the acoustic multiplicity, inherent in telematics.

The Concordia Laptop Orchestra (CLOrk) is made of 25 laptop performers and is characterized by large immersive sounds, a wide dynamic, timbral, and expressive range, solo performances, sound painting conduction, and network music (including synced beat-making and telematics). Můstek specializes in improvisation with mixed percussion, analog instruments, and digital instruments with haptic interfaces. The Transcenders are directed by Mark Dresser (UCSD) and Michael Dessen (UCI). 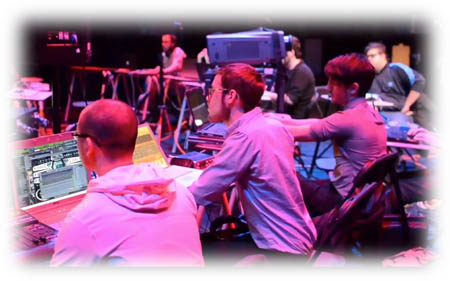